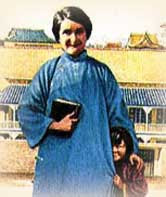 Missionaries have long held a curious fascination for me. I have never been convinced enough by any religion myself to have strong beliefs, but all the same I am full of admiration for their singlemindedness and dedication. I wrote an earlier post on Mary Livingstone who is one of the better-known missionary wives, but was in reality a female bucket-carrier, being first a missionary's daughter and then later a missionary's wife and not someone born with her own evangelizing fire burning within her.

Many other less well-known women went out into dangerous and forbidding territory and have been forgotten by history. Although she enjoyed somewhat of a revival in the 1950s after Ingrid Bergman portrayed her in the film "Inn of the Sixth Happiness", who today remembers Gladys Aylward? There are a number of sites that carry her biography. But, as is so often the case, sooner or later somebody had to besmirch her reputation and she was the subject of a controversial BBC documentary. This Chinese language website might have another viewpoint, and perhaps there are still some people alive today who were rescued by her who will be truly thankful for what she did.

"I wasn't God's first choice for what I've done for China…I don't know who it was…It must have been a man…a well-educated man. I don't know what happened. Perhaps he died. Perhaps he wasn't willing…and God looked down…and saw Gladys Aylward…And God said - "Well, she's willing."

Gladys Aylward
Posted by Regina of Arbeia at 9:46 AM