"An extraordinary girl; she never would sit still."

In a week when I'm baffled by the reasoning (if any) behind the idiocy of "planking" or what young women hope to achieve in demanding the right to dress and look like hookers on "slut walks", it was heartening to stumble across the remarkable story of a woman from an earlier generation who deliberately went into a hazardous and remote area of the world populated by headhunters - the traditional kind, not modern-day business ones! - but who was accepted by the people and developed a very close bond with them.
She was not formally trained in anthropology but she was awarded the Lawrence of Arabia Medal for her work among the Nagas. (See here for general information on Nagaland.)
Later, in true Empire spirit, Ursula Graham Bower (Betts) displayed grit, resourcefulness and courage in a little-known arena of the Second World War, leading her Naga people in guerilla warfare against the Japanese.
Annabel Venning gives a good summary of her life in this 2010 article in The Daily Mail. In 1945, Time Magazine wrote about her exploits with the lurid title of "Ursula and the Naked Nagas".
Yet again, this is another amazing woman who deserves to be much better known but still seems to be just another feminine footnote to history.
Maybe that could change, with a new book on Ursula scheduled to be published in 2012.

Ursula wrote several books herself and a couple of radio plays were written about her exploits. She took vast numbers of photographs, including those in this collection.
Others can be found along with diaries, manuscripts and other documents at the Pitt Rivers Museum in Oxford and at Cambridge University, including some unique colour film footage from the 1930s and 1940s.
For anyone wanting to gain more insight into what women of that British Empire era could be like, the two-part video interview done in 1985 by Alan Macfarlane is an excellent resource.
In the first part, Ursula describes her immediate feeling of connection with the Naga people, as if she had always known them. Her manner is very matter of fact as she describes living among them, their culture and habits and, not least, their great bravery during the War. And in the last few minutes on the second tape, she tells us in her wonderfully plummy voice, and with typical understatement, how she came to meet her husband, get engaged and married within three weeks!  It seems she made the right choice and F. N. Betts had a distinguished career of his own and wrote many publications relating to natural history. One of their daughters described going back to Nagaland many years later in this transcript of a BBC radio interview. 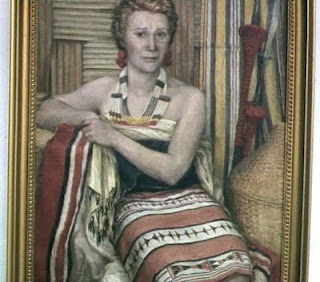 Her mother once said Ursula was "an extraordinary girl; she never would sit still," but it seems she did sit still long enough to have this oil painting done wearing the traditional wedding dress of the Zemi people. The portrait is from a private collection and can be found among the numerous artefacts listed on the university Index relating to Ursula.

Posted by Regina of Arbeia at 6:45 PM