Desert Queen of the Never Never

History is full of stories of people who have fled far from their origins and made new lives for themselves elsewhere, often using fake names and identities. Not so easy to do these days when most of us leave a trail that is traceable via technology, but it was still quite easy a century or more ago.

Just as Breaker Morant (see my post on my companion blog Digging the Dust) pretended to be someone far grander than a lowly lad from Somerset whose parents ran the local workhouse, so did the woman who was briefly his wife, the inimitable Daisy O’Dwyer, daughter of an alcoholic boot-maker from Roscrea, Tipperary, who created a new persona for herself with highfalutin aristocratic connections.

She’s fallen out of favour these days due to society’s changing perceptions and attitudes, but Daisy Bates was once highly esteemed in Australia, and even received a C.B.E. from King George V, for her long devotion to the Aborigines in remote and inhospitable regions. And although some of her writings and controversial opinions are now discredited, she still warrants respect for her lengthy dedication to the people of the desert, also for recording languages and folk tales in danger of being lost.

The basic biographies of Daisy Bates that are available online vary widely, even the respected Australian Dictionary of Biography carries information that is now known to be incorrect. What is certain is that she was married at least three times without bothering to get a divorce from her first husband, who was that above-mentioned other Australian legendary figure, “Breaker” Morant, aka Edwin Murrant, aka Harry Harbord Morant.

When 19 year-old Edwin Murrant met the bewitching Miss Daisy May O’Dwyer, aka Margaret Dwyer, who was five years his senior, and pretty handy herself with Irish blarney about her own humble origins, they must have been a match made in charlatan heaven. Perhaps they were so alike and so crafty they didn’t actually detect the real truth about one another. They married at Charters Towers, Queensland, on 13 March 1884. It all came unstuck when Edwin didn’t pay bills connected with the wedding and took off.

There is the suggestion in one biography that it was a shotgun marriage and there may have been a child called William who either died or was adopted on the quiet but the genealogical evidence, if any, has been lost. Edwin went his own way - and to what some consider martyrdom during the Boer War - and Daisy went hers, twirling her parasol around fancy Tasmanian country estates and other places where she would rub shoulders with the rich and powerful.

Without bothering to get formal annulment of her marriage to Edwin, less than a year later on 17 February 1885, Daisy walked down the aisle again with Jack Bates, a stock-man from Nowra, New South Wales. Whatever she initially fancied about him soon faded and, while he was off droving cattle, she popped up to Sydney in June 1885 and where she married a merchant seaman, Edward Baglehole, apparently an old flame from her pre-Breaker days. In June 1886, she gave birth to her only child and unless Jack’s presence in Daisy’s life can be matched accurately with a likely date of conception, one must assume the boy’s father was Baglehole.

Curiously - and with a touch of the macabre - she called her son Arnold, which was the name of a previous lover of hers in Queensland, one Arnold Knight Colquhoun, who appears to be another member of the charlatan coterie hiding a lurid past in America and China and who allegedly committed suicide over her.

Although Jack and Daisy did not get on, they did keep up the marriage appearances for several years until Daisy abruptly abandoned both Jack and Arnold in February 1894 and signed on as a stewardess on a barque via Cape Horn to England where she stayed for several years; doing what exactly nobody knows for sure, but it apparently involved visiting more country estates and more parasol twirling.

The various biographers all have their own theories as to this abrupt decision, why a wife and mother would just take off as she did. Some suggested that she was fed up with Jack’s itinerant work and inability to provide a proper home for her and that she would stay away until such time as he was properly settled.

When Daisy finally returned to Australia in 1899, she would call herself a journalist after getting an assignment from the London Times. She also came with a considerable bank balance. Origins unknown. One of her biographers has a theory this was money obtained from Edward Beaglehole’s father for the upkeep of Arnold but there is little proof to back up this idea.

What is somewhat surprising is that Daisy resumed her life with Jack Bates and her son, although it is thought the marriage continued as a convenience in name only and perhaps her long sojourn in England had been with Jack’s approval as a way of seeking out alternative sources of income to prop up the family’s finances after the major depression of the 1890s had nearly wiped them out. Since Daisy destroyed much vital evidence about her life before she died, one can entertain all kinds of speculations as to how this was achieved but without solid proof it has to remain a mystery.

Daisy finally turned her back on her family around 1902 when she embarked on her major transformation in which she was destined to become known as Kabbarli, or grandmother, of the Aborigines. (Quite a number of poems, books, plays, documentaries and even an opera about Daisy Bates have Kabbarli in the title - see list below - and there once had been plans for Katherine Hepburn to play her in a move. )

From then on poor Arnold, no doubt psychologically damaged by Daisy's appalling mothering, wanted nothing more to do with her. His World War I service record file at the National Archives in Canberra has letters from Daisy who wanted to make contact with him but which he deliberately ignored. He moved to New Zealand and did not even attend her funeral in Adelaide in 1951.

Daisy became fascinated with the culture of the Aborigines, a race she was convinced was in the process of dying out and she set out to protect them and salvage their language, culture and legends for posterity. All of this was a major about-turn from her shady past that no doubt once involved getting money out of men in ways that one can only guess at. Perhaps she had a moral epiphany of sorts and found salvation in such work with the marginalized tribal people.

Her image became famous throughout Australia. Right up until she died in 1951, she still dressed strictly in accord with the Edwardian era and carried an umbrella that allegedly had been picked up by none other than the future King George V when Daisy dropped it during a regal event in Perth.


Even if her reputation has suffered with changing times, Daisy Bates was still unique. She did not involve herself with trying to educate the Aborigines or convert them to some religious faith. She did not treat them as specimens with the view to self-aggrandisement. She simply wanted them to stay just as they were, and had always been for thousands of years, and to avoid the contamination of European civilization. In her forty-plus years of living beside them in a tent in the deserts of Western and South Australia, she learned far more about them than many university-educated anthropologists on the occasional field trip ever could. Even if her star has become a little tarnished with time, it is worth remembering her positive contribution in trying to preserve the history and culture of Aboriginal Australia.

Links to pages for anyone wishing to learn more about Daisy Bates in detail:

The Passing of the Aborigines, written by Daisy Bates

Daisy Bates in the Desert by Julia Blackburn

Kabbarli, a Personal Memoir of Daisy Bates by Ernestine Hill

Daisy Bates: Grand Dame of the Desert by Bob Reece 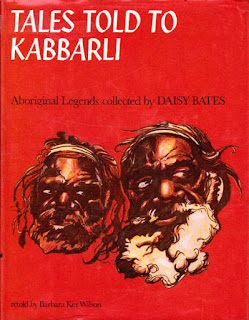 And even more Kabbarli connections:

The Young Kabbarli, an opera.

Tales of Kabbarli, a play.

Another play, Daisy in the Dreamtime

And the film starring Katherine Hepburn that never never made it

Posted by Regina of Arbeia at 9:28 PM