Another woman who was also described as a "Florence Nightingale" (of South Africa and/or the Anglo-Boer War) is something of an enigma and considered to be a borderline "adventuress" which, in the parlance of the times in which she lived, meant that either her morality or social status was questionable and certainly the latter in the case of Melina Rorke.
She was born Melina da Fonesca in South Africa c. 1873. During that era, the colonising British were notoriously snobby and racist towards anyone with Portuguese ancestry so she would have already been marked as something "other" with her mother being a descendant of the famous 1820 Settlers who had unfortunately made the social faux pas of marrying a man who was at one time the Portuguese Consul to what is now Mozambique.
In 1887, Melina married an accountant, Frederick Niland Rorke, in Kimberley. According to the Western Cape Archives, the groom was 23 and she was 19, but Melina states in her memoirs that she was much younger, only 15, and admits to lying about her age to the Registrar. And that's not the only time she was guilty of doing so. She became a mother within a year and also alleges she was promptly a widow, which was total fiction. In fact, she, her husband and her brother, Sebastian, were among the early pioneers to Rhodesia in 1894, where they pegged gold-mining claims. It seems she then went to London in 1896 to complete a nursing qualification but that Frederick "shot through" to Western Australia in her absence. She later obtained a divorce in 1899 on account of his desertion. It is no wonder this is not mentioned in her memoirs as to be a divorced woman as well as of Portuguese extraction wouldn't have enhanced her reputation.
Her 1938 memoir was originally published in New York by Greystone Press as The Story of Melina Rorke R.R.C. [Royal Red Cross] The Florence Nightingale of South Africa. In it, she tells us about her pioneering life, the Matabele Rebellion and Boer War, and name-drops many famous figures in Southern African history such as Cecil Rhodes, Dr Jameson, Barney Barnato and Robert Baden-Powell.
But Melina was unable to shake off a sceptical reception in Rhodesia where the book was declared to be full of historical inaccuracies and her own wild imaginings, with possibly even some plagiarised sections. However, on the plus side, it remains one of the few first-hand accounts written by a woman who lived in that region of Africa and witnessed important events during the late 19th and early 20th Centuries and it is still worth reading today for that background - albeit with the proverbial pinch of salt.
The book was republished as part of the Rhodesiana Reprint Library in 1971 with an even more florid title of Melina Rorke. Her Amazing Adventures in the Stormy Nineties of South Africa's History. Told by Herself.
Melina is reputed to have left Africa for the United States around 1908, where it is alleged she became an "actress" - not a choice career move for anyone wanting to avoid the dreaded "adventuress" tag. Her son Edgar was supposedly involved in the insurance industry, but what she was really doing those thirty years until she published her memoirs remains a mystery. This closing reference from the dust jacket of the 1971 edition:


"Melina carried on a correspondence with various members of her family in Rhodesia and South Africa until 1940 when a letter was returned marked "deceased". Her husband [Frederic Rorke] who went to Australia is said to have died there in the early 1920s.
During 1950 and 1960 a number of Rhodesians who visited Rhodesia House in London met a Mrs Margaret Meredith who claimed she was Melina Rorke and that she had remarried twice. She died in March 1964, aged 98. Available evidence does not support her claim which serves only to heighten the mystery surrounding Melina Rorke after her departure from Rhodesia." 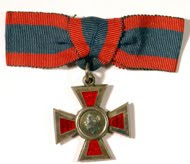 Romantic, poetic or fabricated memoirs aside, there is no doubt that Melina Rorke was involved in nursing men under awful and challenging conditions during the Boer War, as the Royal Red Cross is not an award given without due merit, its first recipient being, of course, the real Florence Nightingale. (Image http://www.redcross.org.uk/ )
If Melina had to embroider or juicy up the facts of her life in order to sell a book at a profit many years later, she would only be doing what many people have resorted to since autobiography began. 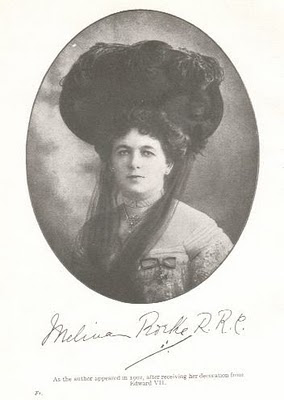 Images are from Rhodesia Reprint edition (copyright Books of Rhodesia Publishing Co. (Pvt.) Ltd., Bulawayo.) The first shows Melina wearing her medal, with the caption, "As the author appeared in 1902 after receiving her decoration from Edward VII". The second is a Testimonial dated 17 May 1900 acknowledging her nursing efforts at both base and field hospitals at Mochudi, Gaberones, Lobatsi and Mafeking. Two of the regiments bearing signatures are British South Africa Police and Southern Rhodesia Volunteers. There are no signatures under the heading of Rhodesia Regiment, and again Melinda's veracity is drawn into question as although her caption informs us that "Not a single man was left alive in the Rhodesia Regiment to sign it," subsequent historians have debunked this as in fact the Regiment had been disbanded and all the men gone their separate ways by the time the Testimonial was prepared. 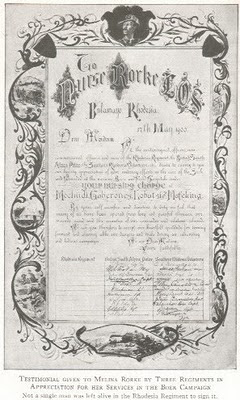 Posted by Regina of Arbeia at 2:50 PM 5 comments: Links to this post

A rather curious form of posterity is having yourself named after an asteroid or minor planet, more so if you are not in any way associated with astronomy, astrophysics or the exploration of outer space. The Dictionary of Minor Planet Names by L D Schmadel is worth browsing, if only for its remarkable listing of people, places and things after which these planets are named, from ancient pharaohs to samurai, from HMS Bounty mutineers to B-grade actresses, and there is even Dr Who's Tardis.
Of relevance to this post is No. 3321, known as "Dasha", discovered in 1975 and named after Darya Lavrentevna Michailova, described as the first Russian army sister of charity during the Crimean War, and better known as Dasha Sevastopolskaya. There is little to be found - at least written in English - about Dasha (the woman, not the planet) even with the aid of all-knowing Google.
Her description as an "army sister of charity" is probably not quite correct according to the outline that Helen Rappaport gives about Dasha's achievements in her excellent book No Place for Ladies - The Untold Story of Women in the Crimean War. For anyone interested in learning more about numerous unknown women of all nationalities who literally carried buckets behind men during one of the worst military blunders in history, this book is highly recommended reading.
Dasha Sevastopolskaya is just one of them who deserves to be better-known and who can stand tall alongside far more famous women such as Florence Nightingale or Mary Seacole in her accomplishments. 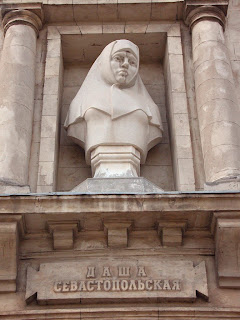 In 1854, Dasha was aged about 18, the orphaned daughter of a Russian sailor. She worked as a laundress and needlewoman in the Russian naval garrison in the Korabelnaya district of Sevastopol. When the British invaded, she sold all that she had, including her chickens and her pig, bought a horse and wagon and loaded it up with barrels of water and food. In disguise as a naval apprentice, she headed into the Russian supply lines where she established the first nursing station of the war, cleaning the men's wounds with vinegar and dressing them with bandages made from strips of her own clothes. She was soon recognised by the sailors who knew her from Korabelnaya but she was allowed to continue her valuable voluntary work and together with other wives of Russian servicemen helped tend to wounded men during the siege. A memorial was erected to her, and Helen Rappaport further tells us:

"Dasha's selfless heroism soon became legendary... News of it reached Tsar Nicholas I in November 1854 and she was awarded 500 silver roubles and the gold medal 'For Zeal', becoming the only working-class Russian woman to receive the award. The following year she married and opened a tavern; imperial generosity responded with a dowry of one thousand silver roubles from the Tsarina."

Unlike Britain, Russia was much more generous in acknowledging the valuable service of all kinds of women, including ordinary army wives, in the Crimea. Rappaport tells us around 120 Sisters of Mercy, a semi-religious order founded by the Tsar's sister-in-law after the Battle of Inkerman, received both gold and silver medals for their work, and 'For Zeal' was also presented to women who carried supplies and ammunition to the bastions throughout the bombardment. Some even received higher award military medals 'For Gallantry'. (Image: Medal awarded to Russian participants of the Defense of Sevastopol in 1854-55.)
In 1855, Dasha married Private Maxim Khvorostov and continued to work at one of the city hospitals for the rest of her life. When she retired, the patients collected money to buy an icon of the Saviour and presented it to her. She died in Sevastopol in 1911.
In case you were wondering, yes, Florence Nightingale is also celebrated with an asteroid, No. 3122 discovered in 1981 at Siding Spring Observatory in New South Wales. It is classified as a "near-Earth asteroid and a potentially hazardous one". Sounds rather appropriate for the no-nonsense and determined Florence.
Some wonderful artwork and history about the Russian side of the Siege of Sevastopol and in which Dasha is mentioned can be found here.
Posted by Regina of Arbeia at 10:53 AM 2 comments: Links to this post