The word ‘adventurer’ is usually defined as someone who undertakes exciting enterprises, often involving risks and in dangerous circumstances, the sort of person who is envied by others whose lives may seem dull.  Add ‘female’ in front of the word - or use its slightly archaic feminine version, adventuress - and it takes on quite a different meaning.

The 19th Century public loved to lap up lurid tales of female adventurers. They were usually free spirits or con-women who snubbed their noses at the laws and morals of the day and in the process often bamboozled many people – the rich upper classes being a favourite target - and they were sure to generate columns of print when they got caught out.

Some of them became exceedingly famous for their exploits that might include bigamy charges, such as Lola Montez (on whom I have written at length under my other hat as historical novelist – see here) but there have been others whose actions are just as extraordinary in their own way. The sheer chutzpah of some of these women is breathtaking.

It was this report on the trial of Lady Ada Alice Wyattville in The Morning Post of January 17 1848 below a story about Lola that caught my eye. What I discovered about her bigamy shenanigans would put Lola in the shade. 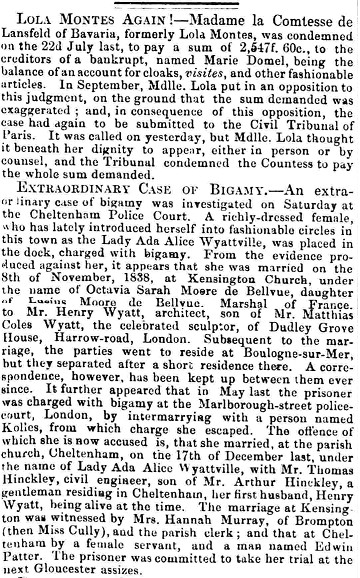 So who was Lady Wyattville?

A detective of the time stated that she was just plain Sarah Moore, originally from India, and had worked as a maid in a house in prestigious Cadogan Square in London. Given her track record, however, this can't be relied on either.

What is likely is that she was able to observe and study the behaviour and manners of high society in great detail somewhere in her past, and this was how she later managed to pass herself off so convincingly as all manner of posh characters, from the daughter of a Marshal of France to grieving widow of a British colonel.

The newspaper reports in that era are frustrating as the accounts of her exploits vary wildly. Her age is described as anything from 20 to 35 and is even more complicated by the fact that the spellings of all the names involved, including the witnesses, are inconsistent so tracking her progress through the press can be difficult.

But it seems she first “excited much notoriety in Cheltenham” at her trial for bigamy, and some reports even go so far to suggest her three husbands were all resident in the same establishment in Cheltenham while she was on trial! Could that possibly have been true? No wonder the gossips were titillated by the event. As far as can be ascertained, this is her marriage track record:

And here are just some of her aliases:

For some bizarre reason, the bigamy case came to nothing and the court did not pass sentence due to a technicality. Perhaps Lady Ada’s acting talents with copious amounts of waterworks got the members of the court thoroughly flummoxed.

However, within a short time she was back, this time as plain Ada Hinckley, and for nicking a gold watch. She was sent to Gloucester gaol for twelve months and the judge described her as a woman with “specious and extraordinary pretensions”. But she didn’t serve her full sentence and was allowed out due to an outbreak of cholera within the gaol. Then -

“... no sooner was she released, however, that she was at her dirty work again; and having paid a flying visit to Cheltenham, she succeeded in ‘doing’ two or three of the tradesmen there, but finding the ‘Queen of the watering places’ too hot to hold her, she returned to Gloucester.”

There, it seems she did some more fiddling and diddling and even had the nerve to visit her former turnkeys at the gaol who did not recognise her before she managed to flit off elsewhere.

Within a year she was up again in Wandsworth police court on two charges of robbery, under the name of Anna Mary Anson, having stolen “a handsomely bound church service” from a boot-maker, also a purse and a miniature from a Mrs Reeve (Reid in some reports) who told of hearing an elaborate tale about her having been in India, that she had family links to the high-and-mighty, including the Duke of Wellington and even the Queen herself. Mrs Reeve seemed to have been totally hoodwinked by her story, also that she lived at a prestigious address in Pall Mall, and only discovered the loss after her visitor had left.

A young woman in Chelsea, Elizabeth Edwards, had found the missing purse and told the police of this same woman arriving on her doorstep seeking accommodation with the sob story she was a governess who had been burnt out of house and home. She managed to finagle bed-and-board and even a new dress out of Elizabeth and her mother. Needless to say she flounced off wearing the new dress, never to be seen again.

Our enterprising adventuress pleaded the court’s sympathy due to her earlier incarceration at Gloucester, even though it had only been for three months, and because she was “enceinte” (pregnant). But Anna Mary Anson was finally done for and remanded to appear again a few days later when several other cases were brought against her, including stealing gold studs or cuff-links from a Mr McGregor while on the pretence of finding accommodation for the son of an aristocratic gentleman of her acquaintance.

It was on this latter charge as Hannah Mary Anson, she came up before the Old Bailey and on 6 May 1850 was sentenced to transportation for 7 years to Van Diemen’s Land (Tasmania).

The convict records for Tasmania are well-documented, and from them we can find out more about Hannah. The charge sheets tell us she was a woman aged about 30, 5ft 1in in height, with light brown hair, blue eyes, fair complexion, oval face, medium mouth, pointed nose, large chin, and with one mole on her left cheek, two smaller ones on her right. She could read and write and states her former profession as Governess. The records also describe her as married with two children - unfortunately no mention of their names.

She was granted a ticket-of-leave in 1853 and recorded for a pardon in early 1854, but soon had it rescinded. It may seem harsh to our modern eyes that she was sentenced to an additional four months of hard labour simply for “being found in bed with a man” but her ticket-of-leave was revoked and she was considered so “bad” that she was not permitted to enter services again in Hobart. (William Seccombe, the surgeon who signed this document was a dodgy individual in his own right, but that’s another story.)

The last newspaper mention of her as Hannah/Anna is in the Colonial Times of Hobart in April 1856:

LARCENY. Anna Maria Anson, a ticket of leave holder, was yesterday charged at the police office by Constable Dorset with larceny, in stealing on or about 20th March one gold ring, value £1 the property of one Sydney Barnham. The prisoner pleaded guilty and received a sentence of twelve months’ extension to her existing sentence of transportation. Another charge was afterwards preferred against the prisoner, that of illegally pawning on or about the 24th of March one muslin de laine dress, the property of James Waldy [or Mrs Lockwood in another paper], to which she pleaded guilty and received a sentence of six months’ imprisonment with hard labour. Messrs Henslow and Dowling adjudicated in this case.

Another interesting fact is that the Tasmanian records also show that at the time she received her first ticket-of-leave she had received approval to marry a non-convict man named Edward Gregory, subject to her being free of offence, but there is no evidence of this marriage ever taking place as she clearly got herself locked up again.

So what happened to Hannah and/or her children? After yet another bout of imprisonment with hard labour, did she finally learn her lesson and reform?

And whether or not she did, whatever her next steps in life were, they were probably under yet another alias.

Transportation to Tasmania had ended by this time and the Gold Rush in Victoria on the Australian  mainland was attracting thousands of free settlers, and a new society was being created that had opportunities for everyone to improve their lives, including ex-convicts.

If she ever managed to overcome her urges to steal or defraud, with her literacy and intimate knowledge of English high society, Sarah/Hannah/Anna et al had already demonstrated attributes that could have been used in a positive way to lift herself out of the gutter. Unless she had been thoroughly destroyed by her treatment with years of hard labour, or had died quite young, perhaps she was able to follow a better path in life.

My research continues and if anyone reading this has any clues as to what happened to this particular female adventurer, I would dearly love to know.

All newspaper reports online via www.nla.gov.au