Jacqueline Winspear is a favourite author of mine. Her Maisie Dobbs series of books are excellent and although they are often categorised as crime or mystery novels all of them are historically accurate and contain perceptive insights into human nature and the lingering psychological results of war. Jacqueline has recently started a Maisie Dobbs blog that includes items on women's history and I was particularly interested in her discovery of Louise Mack, the Australian writer who is credited with being the first female war correspondent of World War I and who wrote a book about her experiences. 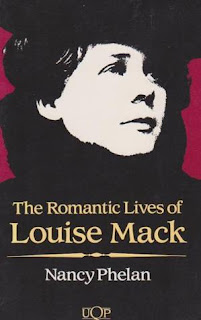 Not knowing anything about Louise either, I went in search of her and tracked down the biography written by her niece, Nancy Phelan, The Romantic Lives of Louise Mack.
Google Books calls this book "fictional" and perhaps it is as much of Louise's life remains a mystery and Nancy draws mainly on family memories and her own personal recollections of her aunt to round it out.
The book does succeed in an intimate look at a woman full of flaws and contradictions and who was determined to live a Bohemian existence as a free spirit. This naturally resulted in difficulties for many of those whose lives crossed with hers. Her first husband, John Creed, totally gave up drink in order to win her but when her writing career became more important than her marriage, he tragically defaulted and died a broken man. Likewise, Louise's youthful exuberant and close association with another Australian writer, Ethel Turner, fell on hard times. Yet Louise's unswerving attention and devotion to her second, much younger, husband Allan Leyland who was gassed in the First World War couldn't be faulted.
Ethel followed a more conservative life and is still well-known to many Australians due to her classic book Seven Little Australians, but Louise seems to have been completely forgotten.
She was often her own worst enemy and many times came close to starving and penury, being forced to write serials and romantic potboilers under various aliases to earn a living and she never quite reached her potential as a serious author. Perhaps one of her greatest sins was in using real characters in her books and not bothering to disguise family, friends and the socialites and other prominent individuals whom she hijacked. She was for a time the "agony aunt" at the Australian Women's Weekly and Nancy Phelan wickedly suggests she was also the author of many of the letters sent in and the "advice" given was often at odds with the morals and standards of the day and more in keeping with her own somewhat haphazard attitude to life and her neglected family relationships. Needless to say, she didn't last long in the position. Also when she travelled and lectured widely later in life, Nancy says she tended to fantasy when it came to her war experiences as well as the famous people she may (or may not) have known and thus couldn't be completely trusted.
An obituary of Louise Mack can be read here. Although she didn't have descendants, at one time she stated that she did have a living child. Nancy Phelan's book explores the possibility that there was a child born in Italy during one of her aunt's long "disappearances" but proved inconclusive.
Links to some of Louise's books including her most famous A Woman's Experiences in the Great War are available through the Internet Archive.
In keeping with her family's tradition (Louise's sister Amy Mack was also a writer) Nancy Phelan herself was equally talented and colourful individual, a winner of the Patrick White Award. Only when I read her obituary from 2008 did I realise I'd failed to notice that she was the co-author of the most reliable Russian Cookbook that has been a staple of my recipe collection for many years.
Posted by Regina of Arbeia at 1:05 PM No comments: Links to this post