Mention the slave trade and most people are likely to envisage images of the infamous “middle passage” - sailing ships laden with black people heading out from the west coast of Africa across the Atlantic and destined for the Caribbean, North and South America.
But a fascinating website created by the New York Schomburg Center for Research in Black Culture on the African Diaspora in the Indian Ocean tells another less well-known story on what happened to slaves sent from East Africa - from places like Zanzibar or Mozambique - to India and countries as far away as Palestine, Iraq and Iran.
This image from the website shows routes of that slave trade and the rough estimate of number of slaves shipped to the various countries between 1500-1900 - nearly 1.5 million to Egypt alone. 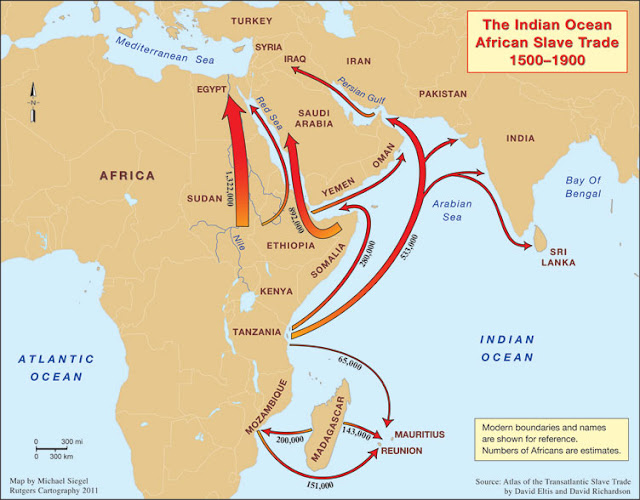 The real figure is probably far more as it may be astonishing to many people to read that “Slavery continued in Muslim lands in the Indian Ocean world well into the 20th century: Saudi Arabia did not abolish slavery until 1962, and Oman did not officially do so until 1970.” And the sad truth is that it still continues today in some form in war-torn or un-policed remote areas that are well away from the prying eyes of investigative journalists.

But with the main purpose of this blog to focus on women, a photograph of a Mrs. Crewe with some of the slave girls at the Cairo Home for Freed Women Slaves, caught my interest. When was the Home established, who was Mrs. Crewe, and how did she come to have the position of matron? But there is little to be found online, apart from reports in British newspapers of the era.

The Home was founded in 1884 under the auspices of the British and Foreign Anti-Slavery Society with a committee that included many great philanthropists of the day including Mrs. Sheldon Amos (nee Sarah Maclardie Bunting) – a remarkable and far-sighted woman who warrants a future blog entry of her own. Queen Victoria donated £100 - or about £5,000 today . The committee then appointed a “Mrs. Crewe – an Englishwoman born and bred in Egypt and speaking Arabic with perfect fluency” as the matron, and a suitable house was found in a “healthy quarter of Cairo” where:

“Mr. and Mrs. Crewe, with their family of young children, were installed in January 1885, and on the 16th of that month the first girls were received, these being two Circassian slaves who had escaped from the palace of a well-known pasha.”

Various subsequent reports detail some of the dreadful conditions, cruelty and brutality from which the girls had escaped, also this:


“Mrs. Crewe has had to exercise great caution before complying with the requests of Mahomedan gentlemen for servants, as it might mean simply giving the girls back to slavery; most of them have, therefore, been sent to the houses of Christian Syrians or Copts. The girls give satisfactory proof of their appreciation of the slave Home. They often leave little articles of property – even their freedom papers – with Mrs. Crewe. They come back from time to time to see her, to ask her advice, to show her new clothes, to get her help in changing situations, etc., so that although they may not reside long in the home itself they continue to recognize it as, in fact, a home to which they can return in time of need.”

Charles H. Allen, the Secretary of the British & Foreign Anti-Slavery Society kept up a regular correspondence to the Editor of The London Times about the Home, pleading for extra funds while updating the readership on its operation. By April, 1900, he was able to announce “the complete success of this important philathropic undertaking”. Up to 1,000 women were rescued from slavery during the twenty years of the Home’s existence.  Many of the women had married and had families.

After the closure of the Home, Mrs. Crewe slips out of history, but probably remained in Egypt and was the sort of woman who would have always involved herself in good works.

With the increasing interest in the subject of the slave experience, there is much scope here for the lives of these rescued women to be investigated in depth and written about.  Follow this link for an academic paper by Eve Troutt Powell on Slavery and Empire in Egypt which details an infamous trial involving six slave women and the powerful pashas and which created a scandal of international proportions.

Posted by Regina of Arbeia at 1:20 PM No comments: Links to this post

Not many women will know that Australia was the one of the first countries to give women the vote.
An excellent documentary “Utopia Girls” fronted by historian Dr Clare Wright was screened on ABC TV on June 14, 2012, the broadcast coinciding with the 110th anniversary of the day when women were granted the right to vote at a federal level and to stand for election to the Parliament of Australia via the Commonwealth Franchise Act.
This is a documentary that all women should watch – the young in particular who may take their voting rights for granted and know nothing of the great struggle involved.
It should be available to view in its entirety, in Australia at least, via ABC’s iView for a short period.
Also see this website for more information and an interactive experience:
http://www.utopiagirls.com.au/
Posted by Regina of Arbeia at 10:48 AM No comments: Links to this post