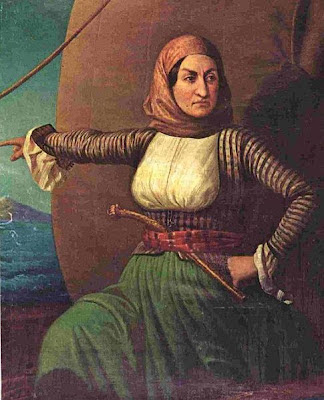 I’m always excited when I discover fascinating women from history of whom I was previously unaware. And in this case, I have to thank Joanna Lumley’s delightful and informative TV documentary series about Greece for introducing me to the extraordinary Admiral Laskarina Bouboulina.

On following up the episode, I discovered Bouboulina’s links to Russia that added another dimension of interest – her connection with the diplomat Count Stroganov[off] - who may, or may not, be the one associated with that beef recipe - and who saved her from the Turks by sending her to an estate owned by Tsar Alexander I. It was the Tsar who bestowed her with the title of “Admiral”, the only woman to become one.

This webpage offers a good summary of her life and actions taken from information that is also available at the Museum dedicated to her on the Greek island of Spetses.

Otherwise, there little else to be found on Bouboulina and there does not appear to have been any English-language biographies or, better still, a blockbuster historical novel.

In 2005, a documentary about her by April Householder was presented as part of a dissertation at University of Maryland but I haven't been able to find out whether this documentary is accessible to the general public.

But Boubalina wasn’t the only sea-faring female champion of Greek Independence. 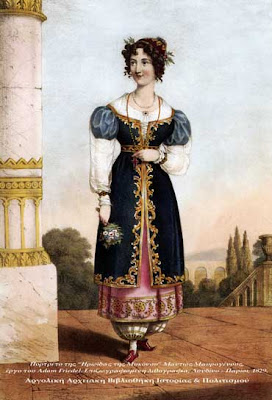 Another was Manto Mavrogenous, the “Heroine of Mykonos” who was equally fearless and gained her own title of “Lieutenant-General”. Most of the online references to her are in Greek, and there was a film made about her in 1971.

Read all about her here and at Mykonos.

Both Bouboulina and Mavrogenous are highly esteemed by the Greek people and they both appeared on drachma coins prior to Greece's now seemingly unfortunate decision to join the Euro. Perhaps they could do with some more feisty women like these two to help to restore the country's confidence and  pride.


Posted by Regina of Arbeia at 12:13 PM No comments: Links to this post