There is a Facebook and Twitter campaign currently afoot to draw attention to this great woman journalist, Clare Hollingworth, who has reached the amazing age of 104 and was firsthand witness to some of the great events of the 20th Century..

Although The Daily Mail is a notoriously tacky newspaper it surprisingly does often run important historical stories such as this, and is also available to read without having an online subscription.

You can also read about Clare in several other UK newspapers such as, The Daily Express,  The Telegraph and The Guardian.


Posted by Regina of Arbeia at 7:30 AM No comments: Links to this post

At one time or another all of us have contributed to those popular culture compilations or lists which ask you to vote for your favourite book, performer, travel destination, food ... whatever … with songs being one of the most enduring and often most controversial.

But if you browse various lists of the best songs of past 100 years or the 20th century, they are really lop-sided and make it look as if popular music germinated in the 1950s and only really got going in the 1960s onwards. The people who create these lists totally ignore the fact that popular music goes back much further than the mid-20th Century, to long before any sorts of mass media recording devices had even been invented.

The first woman composer to sell more than a million copies of her sheet music was Carrie Jacobs-Bond.

Born Carrie Jacobs in Janesville, Wisconsin, in 1862, Carrie’s early life was filled with music but also financial anxieties. It is said by the age of four she could already pick out tunes on the piano and was playing classic pieces by ear by the age of nine with her ambition to be a professional song writer. After her father lost all the family’s wealth, aged 18 she married an E J  Smith and her only child, son Fred Jacobs Smith, born soon afterwards. Six years later she was divorced and in 1889 married a Dr Frank Lewis Bond.

Carrie wanted to continue her music career, but traditionalist Frank believed a wife’s place was in the home. However, she did manage to get sell some children’s songs, but it was only after Frank died after a fall on ice in 1895, that Carrie came into her own, although it took a great deal of courage and determination for her to finally fulfill her dream.  Always struggling with her own poor health as well as lack of funds, she was forced to support her son on her own. Using borrowed money, she moved to Chicago. There she barely survived sub-letting rooms and selling painted china. From the parlorsongs.com biography:-

“Even during these trying times, Carrie was a generous and giving person for she would often give up one of her rooms for homeless who would come by looking for food or shelter or to shovel snow” ...“During this period she was forced to slowly sell off all of her possessions till she and her young son had virtually nothing, except for her beloved piano.”

Slowly but surely, Carrie’s songs came to the notice of friends and neighbours, among them professional singers who were to help in creating demand for her work. One singer, Jessie Bartlett Davis, helped Carrie to publish a collection of these songs in 1901 called Seven Songs as Unpretentious as the Wild Rose. 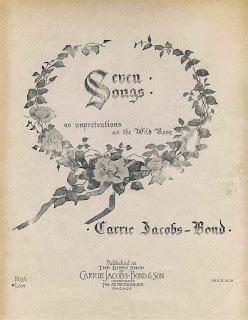 The collection included two that would become her most famous, I Love You Truly and Just a Wearying for You. By 1908, Carrie’s fame had spread and she sang for President Theodore Roosevelt at the White House.

After enduring scorn from many men in the music industry, Carrie decided to set up business for herself and, in partnership with her son, established her own sheet music publishing house. She wrote not only the music, but the lyrics and designed the cover pages that usually featured wild roses.

Carrie’s most successful song A Perfect Day [also The End of a Perfect Day] was published in 1910. She said the lyrics were inspired by a sunset seen from Mt. Rubidoux near Riverside, California, where she had moved for health reasons, and the accompanying music came to her some months later during a moonlit drive across the Mojave Desert. In the next decade, this song sold over 5 million copies in 60 different arrangements, with numerous phonograph and piano roll recordings by 1925. As the book Notable American Women notes:

“Not only did ‘A Perfect Day’ crown and epitomize [her] career as author and composer, but it appeared at the right psychological moment, combining as it did the pathos and optimism of the era that came to an end with the Great War.”

In the decades that followed, Carrie’s sentimental style of music drifted out of favour with the decline of parlour room pianos and the rise of radio, jazz, crooners and generally more sophisticated audiences.

Tragedy was to mar Carrie’s life again in 1932 when her son Fred, who was suffering a bout of depression following an illness, went to a cabin at Lake Arrowhead and killed himself. It is said when he was found, two candles were burning and A Perfect Day was playing on the gramophone.

One can’t begin to imagine the grief Carrie suffered, yet she managed to continue with her life and writing music and we can only echo the tribute to her at parlorsongs.com

“Carrie Jacobs-Bond is one of America’s greatest songwriters. She fought against all odds: infirmity, gender bias, poverty, and alone showed that faith and belief in yourself can overcome all.”

Carrie wrote songs that came from the heart, many of them with easy melodies well within the scope of the average pianist. Sure they were sentimental, but they were in keeping with a far less cynical age than ours. She touched millions of hearts and what better epitaph can anyone have?

I Love You Truly was sung at countless weddings during the 20th Century, and one of its recent outings was in the soundtrack of the film The King’s Speech. Likewise, up-tempo versions of A Perfect Day have also been sung at weddings or other celebrations and the slower more reflective version has featured at many a funeral farewell.

One of my own father’s favourite songs was Just A Wearying for You. My romantic side likes to think that he may well have danced with my mother to this foxtrot version when they first met one another in the mid-1930s.

Just A Wearying for You

The Maguire Sisters with I Love You Truly.


Posted by Regina of Arbeia at 2:28 PM No comments: Links to this post