There are still many "firsts" that women are yet to accomplish in countries around the world.

Another bastion has finally fallen in Australia with the appointment of the first female Chief Justice of the High Court, Susan Kiefel.


Prime Minister, Malcolm Turnbull, said her story was “an inspiration” :- 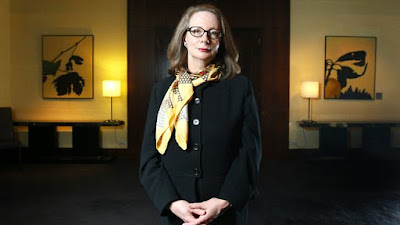 “She left school at 15. She began her working life as a legal secretary. She studied for her completion of high school qualifications part time ... she studied law part time through the barristers admission board. She was admitted to the bar in 1975. She went on after practising at the bar to win a Master of Laws at the University of Cambridge. She took silk in 1987 – the first woman in Queensland to do so. In 1993 she became the first woman to be appointed a judge of the supreme court of Queensland. She has been one of Australia’s most outstanding judicial officers.”

Posted by Regina of Arbeia at 6:37 AM No comments: Links to this post

On 29 September, 1839, a barque called Indus under the command of a Captain McFarlane sailed from Leith, Scotland, bound for Australia. It was a long voyage and the vessel did not arrive at its destination of Port Phillip until more than five months later on 15 March, 1840.

There were only four passengers in cabin class, one of whom intended to become a sheep farmer in the newly-opened grazing districts of Port Phillip. But this was no braw muscle-bound Scotsman intent on taming the bush and making a fortune, the prospective sheep owner was a plump, middle-aged single lady called Anne Drysdale.

Born in 1792, she was the youngest of five children of William Drysdale, the town clerk of Kirkaldy, Fifeshire. The family also had links to the church, law, the civil service and the East India Company. As is the case with most women of her time, Anne’s early years are not well documented. It is assumed she grew up at the Drysdale estate at Pitteuchar near Kircaldy.

Whether Anne had any marriage prospects when she was young is not known, but she had her own income, was well-educated, strong-minded and fiercely independent, all attributes unlikely to appeal to the conservative suitors in her circle. It seems the city lights of Edinburgh did not attract her either and she much preferred the countryside, being keen on farming. For some years she leased a farm of her own in Ayrshire and lived with the Houison Craufurd family in their castle at Craufurdland.


What propelled Anne to leave Scotland behind forever and take a gamble far across the world in Australia is not known for certain, but it is thought problems within the family over her father’s will may have played their part although she was to tell most people that it was health problems that had driven her to new horizons.

With huge tracts of land available to anyone who could afford the ten pound annual licence and enough funds to buy the sheep to stock it, Anne soon took up her 10,000 acres between the Barwon River and Point Henry in the area that now includes the city of Geelong and she built a small house at Boronggoop.

Anne then went on to form a successful business partnership with another independently-minded woman, the much younger Caroline Elizabeth Newcomb, who had arrived in Port Phillip in 1840 from Van Diemen’s Land, as the governess to the seven daughters of the man whose name is recorded for posterity as one of the two founders of the city of Melbourne, John Batman; the other being John PascoeFawkner.

Caroline’s origins and reasons for sailing to Australia are also somewhat elusive. Born in London in 1812, her father, Samuel Octavius Newcomb, was variously a lace merchant and a clerk. In 1823 he was lost at sea, his Probate documents showing he worked for the Commissary Department at Sierra Leone.

Although she is also supposedly another victim of the “health problems” that drove Anne to Australia, being only 21 at the time of her arrival in 1833 in Van Diemen’s Land and with much evidence of a sturdy constitution during her years in charge of the practical side of the Drysdale & Newcomb business enterprise, one has to wonder if there was more to it.

Bev Roberts, author of MissD and Miss N - an Extraordinary Partnership, refers to a passage in John Pascoe Fawkner’s diary in 1836 … “Report circulated by [Henry] Batman that Mr Ellis came up last night to take away Miss Newcombe and he and the men were sett to watch nearly all night to prevent her escape ….” Apparently “Mr Ellis” was a member of the vessel that had brought Caroline to Melbourne. One can draw all kinds of assumptions from this - romantic, illicit, or otherwise, - but without any further evidence it must remain a mystery

Whatever the real reasons for Caroline being in Australia, soon after they met, Anne invited Caroline to move into the house at Boronggoop. Being a healthy and energetic woman compared to Anne who had become increasingly overweight, Caroline took over much of the physical duties in the farmyard, garden and stables. Apparently they shared a bed as well. This has led to some recent assumptions about a physically intimate relationship and some people appropriating Drysdale and Newcomb as champions for the modern GLTB movement, without taking into account that in the tiny houses and limited furniture of the era, it was common for parents, children, grandparents, occasional visitors, even strangers, to share beds with others. Two women living closely together would appear like sisters and not necessarily raise salacious eyebrows, rather they would be treated with curiosity because they had dared to be independent of men.

Both women were also deeply religious and even if they were aware they had what might be considered unnatural tendencies, whether they acted on them is something that can never be proved. People forget that things discussed quite openly today would never have been mentioned, or even comprehended, in years gone by. This may seem laughable or naïve in sophisticated 21st Century eyes but it is important not to judge people in the past by the awareness and openly accepted or fluid morals of today. Another extract from Bev Roberts’ book indicates that Caroline suffered from impatience and a quick temper and that her spiritual conflicts were more concerned with trying to control them than struggling with impure actions of the bodily kind.

While at Boronggoop, many prominent visitors called to visit the lady squatters. They included Charles La Trobe, the first Lieutenant-Governor of Victoria, and his wife Sophie, the Reverend John Dunmore Lang and perhaps one of the most famous, Sir John Franklin and his wife Lady Jane, during Sir John’s tenure as Lieutenant-Governor of Van Diemen’s Land, prior to his tragic final voyage in search of the North West Passage.

In 1849, the two women left behind the cramped timber cottage and moved into a grand stone house at Coriyule on the Bellarine Peninsula, which still stands today. Sadly their time there was brief. Anne died of a stroke in 1853 and was buried on the property. Although deeply grieving for her friend, Caroline continued to run the business and became even more involved in religious organisations, local community and political associations.

Then, to everyone’s surprise, at the age 49, Caroline married a man twelve years her junior - the Reverend James Davy Dodgson. Again, it is inappropriate to assume this was some sort of romantic union and probably had pragmatic aspects for both individuals, including companionship and support. Caroline followed her husband to his various postings around the Colony of Victoria until she died in 1873. He arranged for her to be buried next to Anne Drysdale at Coriyule, but when he sold the estate some years later he exhumed both women and had them interred at Geelong and when he died in 1892 he was buried in the same gravesite.

There are no known portraits of Anne Drysdale, but here are photographs of Caroline and her husband.


Both women are recorded in place and street names around Geelong and the Bellarine Peninsula. A plaque outside the Methodist Church in the town of Drysdale carries this inscription:

In memory of two remarkable women in early Victoria, ANNE DRYSDALE (1792-1853) and CAROLINE NEWCOMB (1812-1874). They arrived as single women in 1840 and 1836 respectively and met in Geelong. At a time when there were few career opportunities for women, they formed a pastoral partnership and successfully operated several properties on the Bellarine Peninsula, employing a number of men.

Some photos found on a public family tree at Ancestry - with thanks to the contributor.


(* Please note in this connection, squatters is the Australian historical term for early landholders and sheep graziers.)

Posted by Regina of Arbeia at 4:25 PM No comments: Links to this post