Continuing with the George Medal theme, Sybil Kathigasu was a brave midwife who was caught and tortured by the Japanese after the occupation of Singapore during World War II.

Her name is probably unknown outside of her home country of Malaysia and it seems that even Malaysians themselves know little of her and why she received her medal. The London Gazette entry of 1947 gives few details and rather than repeating her story here, please follow the link to this blog "Hornbill Unleashed"  - with the warning that the graphic descriptions of how Sybil was tortured by the Japanese may be disturbing to some readers.

There is also this English language video on YouTube.

A mini-series called "Apa Dosaku" was made about Sybil in 2010. Whether it has been shown in countries other than Malaysia or is available for viewing with English sub-titles I have been unable to discover. For more information, see the website of the Malaysian film company Red Communications. Again with a warning that the video trailer is confronting.

This kind of story demands a wider audience beyond Asia. All of us need to be reminded of some of these forgotten episodes of World War II and the bravery of the people who stood up to their invaders.

Sybil never recovered from the brutal treatment she received and died in 1948 but she did manage to leave behind a partly finished memoir entitled "No Dram of Mercy" that was recently reprinted in Malaysia. 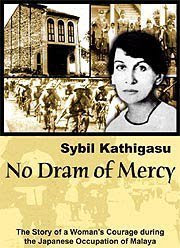 Her daughter, Dawn, escaped the prospect of being roasted alive at the age of six. Here is a cutting about her from The Courier Mail of 2 February 1953.

Posted by Regina of Arbeia at 1:55 PM No comments: Links to this post