The Lady from Beyond the Blue Waters and Sacred Waving Feathers

Apart from the (usually) privileged wives and daughters of administrators and governors, there are many others who had to suffer considerable hardships in the development of the British Empire.

Books such as Joanna Trollope’s book Britannia’s Daughters – Women of the British Empire, also Voices and Echoes – Tales from Colonial Women by Joan Alexander and Pat Barr’s The Memsahibs – The Women of Victorian India are just a few of the interesting sources in finding out about some of them.

The long-suffering missionary wife is perhaps best known and represented in Mary, the wife of the African explorer David Livingstone, but Eliza Field’s story is another inspiring example.

At a time when native and “half-caste” people were often seen in European eyes as inferior and to be kept apart socially, Eliza (born in 1804) created a sensation when she took the extraordinary step of marrying one of them.

One look at the portrait of her future husband and one can see why. Even allowing for the usual licence taken with most historical portraiture, he was certainly handsome but it is the sympathy and dignity reflected in the face that makes him even more attractive. 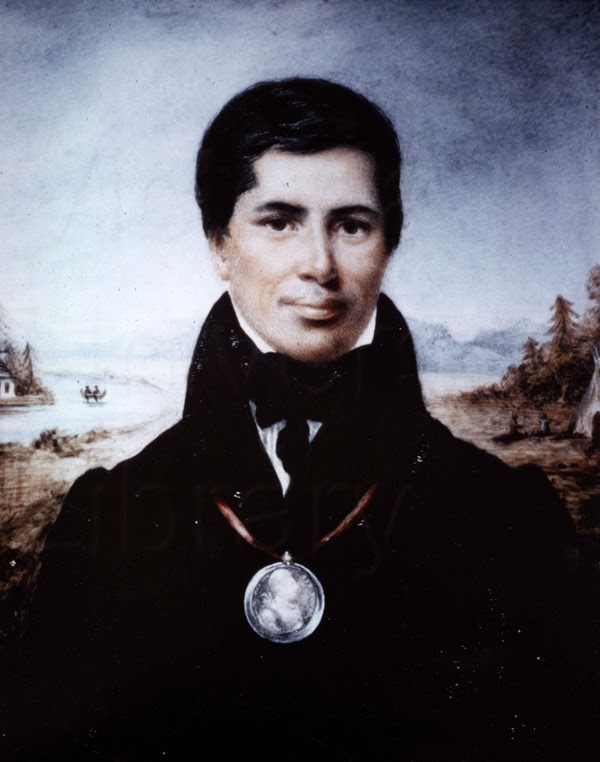 He was the Reverend Peter Jones, a half-Welsh half-Ojibwa missionary, whose prosaic English name isn’t a patch on the lilting Ojibwa one of Kahkewaquonaby - in translation, “Sacred Waving Feathers”.

The story of their romance and life together is worthy of a novel or HBO mini-series at least. One can only imagine the June day in 1831 when the devout Eliza visited friends in Bristol and met this exotic young man who had been staying with them while touring England to raise money for the North American Christian missions.

Was it love at first sight? More than likely as, within months, Peter was visiting Eliza at her home in Lambeth but, also as might have been expected, her family and friends were greatly alarmed at such a match and it was only through her own determination and some fierce lobbying of his good name by others that the objections of Eliza’s parents were finally overcome.

Peter returned to Canada in 1832 but it was to be over a year before the couple were reunited in New York, where they were married in September 1833. Their first home together was in a tiny cabin on the Credit River Mississauga Indian Reserve near Toronto.

The marriage had gained some notoriety in the North American newspapers, and the reaction there was much as had been experienced in England. Adding to the unwelcome attention, Eliza’s early years were a struggle both physically and emotionally. She had lived a comparatively luxurious life before her marriage and now she had to face the realities of tough Canadian winters in a rough, basic cottage on an Indian reserve with its grinding poverty, poor hygiene, and recalcitrant attitudes towards religious conversion and “Europeanisation”.

Fevers plagued Eliza constantly and she suffered miscarriages and two still births and it was only after she had returned to England in 1837 on a recuperative holiday that her health improved and on her return she gave birth to the first of her four sons to survive infancy.

In 1841, Peter was sent to Muncey, near to London, Ontario, where they spent eight years before finally moving into a substantial brick house called Echo Villa in Brantford in 1851. Peter died there five years later worn out after a lifetime of service to his people and to his God.

Eliza was an accomplished writer, diarist and water colourist. She also contributed to a magazine under her Ojibwa name of Kecheahgahmequa or, “The Lady from Beyond the Blue Waters”.

Two years after Peter’s death, Eliza married John Carey, a farmer originally from New York who had once been a school teacher at Muncey. But apparently the marriage was not a happy one and sources suggest Eliza may have left him as Carey did not have Peter’s “natural refinement and amiable qualities”.

For the rest of her life, Eliza continued with her writing and painting and made trips to England, but became blind in 1880 and her last years were spent in Brantford where she died on 17 August 1890.

Follow these links in the Dictionary of Canadian Biography for more detail on Eliza and Peter and their son, Peter Edmund Jones, who was a Mississauga Ojibwa chief.


Posted by Regina of Arbeia at 12:53 PM No comments: Links to this post