Look out for the Bomb Girls!

A Canadian historical television series that deserves a wider audience is Bomb Girls. It was only by accident that I discovered a DVD of the first series in my local library because it certainly has never been shown or promoted here in Australia to my knowledge and I am sure it would find a lot of fans Down-Under.

As soon as I watched the first couple of episodes I was hooked and I'm currently watching the second series. Although the producers, Global TV have a website on which subscribers can watch episodes, it is probably not accessible to viewers in other countries. 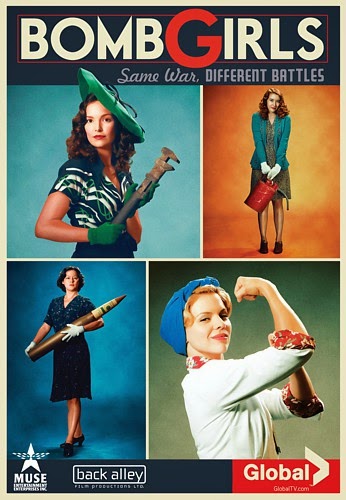 Set in a Canadian factory that employs many women on its production line of munitions for World War II, the series has its fair share of dramas and personal conflicts, but is never predictable and is handled beautifully by the excellent cast of actors – all of whom are most convincing in the roles they inhabit.

What is particularly good is that the series tackles the era and the real history taking place in the background in an accurate fashion, the dialogue doesn't jar with too many modernisms and the women have real bodies under the authentic 1940s fashions.

Apparently the series was canned in Canada and fans started a website to Save the Bomb Girls and it seems a new movie length version is in the pipeline.

Do catch it if you can!

Posted by Regina of Arbeia at 1:04 PM No comments: Links to this post