In the Agenda section of Melbourne's Sunday Herald Sun yesterday, Sunday 20 May, was a story about one woman's quest to have an unmarked grave of her great-aunt a World War 1 nurse, Estelle Lee Archer, rehabilitated by the Office of Australian War Graves Office.


There is much history waiting to be rediscovered on nurses who won the Royal Red Cross, the majority of whom have slipped into obscurity or were just overlooked, so this is a story that should be publicised more. I'd have liked to post a web link to Margaret Leyden's campaign here but am unable to do so as it is not available online, so include a scan of the article instead.


Most articles in daily newspapers are freely available online on the day of publication - or for at least a week or two afterwards but News Limited's webmasters probably don't consider stories like this to be of much interest and if you want to read this article online, you have to pay for it again even if you've already bought the print version!


Even the ghastly UK Daily Mail regularly publishes historical gems free online and although you often have to wade through a ton of unbelievable trash to find them, they can be found.


Rant aside, here are the scans. 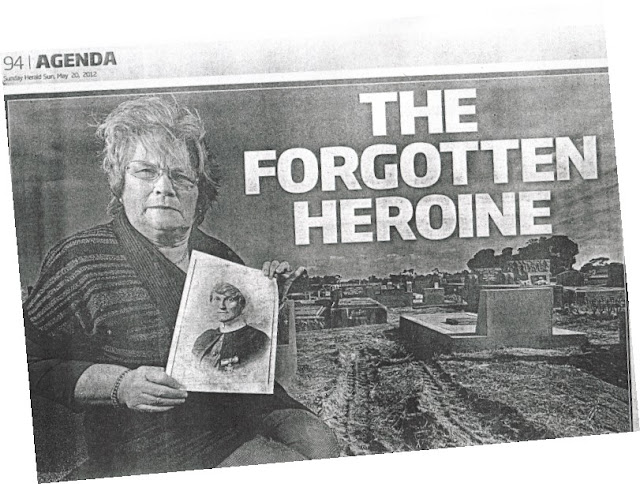 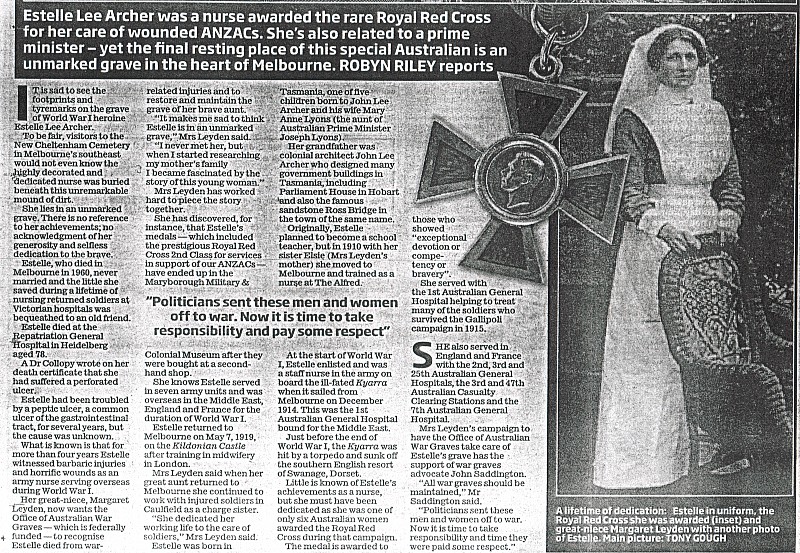 Posted by Regina of Arbeia at 10:05 AM No comments: Links to this post

Nuns on the run

With the Catholic Church in damage control all around the world over revelations of child abuse going back decades, one can’t help wondering if there might also be a cause for women who were bullied into the convent life in times past to seek some kind of apology.

How many unmarriageable daughters or immature teenage girls who were yet to know their own minds ended up behind locked doors through family and/or priestly coercion?
When they realised they were unsuited to convent life, a few were brave enough to walk -  more likely run -  away, but many others would have been so indoctrinated by the system or maybe even too afraid of the wider world to have even tried. How many ended their lives in frustration and bitterness that resulted in mental disorders or harsh treatment of others, including children,  in their care? (Many members of the older generation who had nuns for teachers will know all about it!)
In our modern secular age, it’s easy to forget the bitter sectarian divisions that once raged in society between Catholics and Protestants and that the press was often the major battleground. Reports of “escaped nuns” were guaranteed to inflame passions.
Protestant editors liked nothing better than having some sensational story of a woman defecting from imagined wicked and secretive Romish practices with salacious tales to tell of what really went on in convents.
On the other hand, Catholic Church spokespersons (usually men of course) would proclaim that there was no compulsion on any woman to remain in a convent, that she was always free to leave should she choose. The reality was probably quite different.
The mud-slinging and accusations from pulpits of both persuasions were remarkable. Catholic defectors would be condemned with hyperbole such as describing them as “the foulest weeds in the Pope’s garden” (Fr. Cleary, Minneapolis) and every effort was made to show them to be liars, lunatics, or just simple-minded innocent girls whose heads were turned by money-makers and con-men (no doubt Protestant.)
And of course there was nothing better for restoring Catholic esteem than reports of these poor misguided souls retracting their defection on their death beds and accepting the last rites of their original church.
Researching these women through the digital archives of newspapers can make for eye-opening and fascinating reading. In Chronicling America, there are reports on a number of them such as one Sister Mary Ethel (surname unknown) who came from India and lectured in America on her “10 Years in Hell” and other inflammatory topics, also a Mary Windsor White who retracted on her deathbed.
Some of the more famous “escaped nuns” who published books were Edith O’Gorman and Josephine M. Bunkley (Andrews) and both women were later mired in sensationalism or controversy as to their truth.
Early in the 19th Century, Maria Monk and Rebecca Reed fuelled anti-Catholic hysteria with their writings.
There was a 1869 British court case known as the "Great Convent Case" that can be read at the Internet Archive - Saurin vs. Star & Kennedy – which still generates academic works on the topic.
In Australia as recently as the 1920s, columns of newsprint were devoted to the case of “the nun in the nightgown”, Sister Ligouri, or Bridget Partridge, whose sad story makes for sober reading.
In modern or open societies, one hopes that any woman entering a nunnery these days is able to make her own own informed choice. In other cultures, there could still be clouds hanging over convent life. Just recently, this report appeared in the Indian Telegraph -  and thereby hangs another nun's tale. 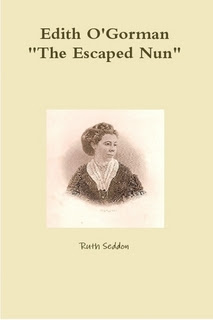 The Nun in the Nightgown

Posted by Regina of Arbeia at 3:29 PM No comments: Links to this post